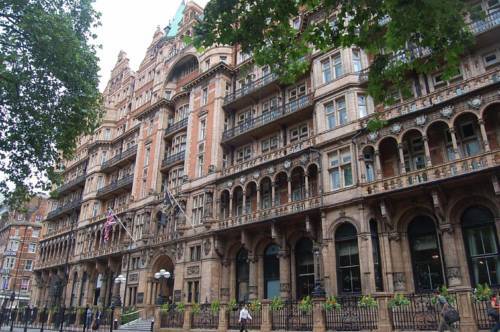 This lovely Victorian building was originally built in 1898. The Hotel Russell was one of London's first 4 star hotels in this period. Some of our rooms have a view over the Russell Square gardens itself which gives you an idea of what a traditional London Square is like.
Close by public transport links mean we are easy to find and easy to use as a base for your tour of the city. Within one mile there is Hyde Park, Madame Tussaud's, Kings Cross, the action in Soho and at least 5 different tube stations. The nearest one of these 5 is of course Russell Square, so we will be very easy to find and get to if you are travelling by public transport.

The design of the inside here has been laid out with an eye on opulence. The splendid surrounding are made so that you know when you come in, you are in a fabulous luxury establishment in the heart of Bloomsbury.

A walk around the gardens is a recommend tourist pastime. Enjoy the feel of what we believe all London squares would like to look like. Also we are quite close to Regents Park which is 2km North-West of us. So if you would like to take a walk through Bloomsbury and then relax in a boat on the lake, it is easy to do from here.

You know you have made the right choice when you stay with us.

Checking In available from 14:00 hours. Payment is accepted by:

Rating of 4.57 out of 5  Unique ID (2057722)
Guests Name: Anonymous  Guest was travelling as: Mature couple
Good stuff: The accomodation, i.e. bedroom was well equipped, clean, and comfortable. We stayed in an Ambassador room, and when you take the virtual tour on the principal hotels web-site, we were expecting a very modern room. The room we had was good, but after looking at the web-site we were expecting something else. We actually got an Ambassador room with two very comfy double beds, and not a king sized bed, as in the tour.
Bad stuff: Breakfast. We paid extra for this. �19? On the breakfast menu, certain things were to order, like porridge, but quite a few items which were supposed to be readyily availabe from the menu, like muesli, hash browns, grapefruit juice etc. were not to be seen. We found alot of items in the cooked breakfast to be cold. Room-serice breakfast orders were being taken from the same 'breakfast bar' used by us, by the 'chef'. For a 4* hotel I was expecting 2/3 toasting machines, where you could have HOT toast, as you wanted it. Other guests were being held in a queue outside the restaurant because there were no spaces!
Overall: Reception staff were very polite, and the concierge. The bar was empty with dirty tables when we walked in. Overall the room was very comfortable. The bathroom was modern, but the bedroom decor wasn't. The beds were very comfy.
Top