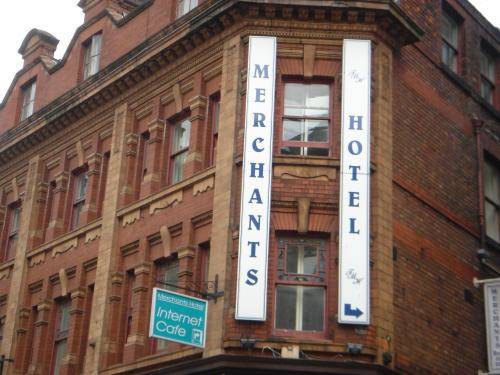 Outstanding value for money awaits you at the Merchants. Located superbly right in the centre of the city. Room types here include some ensuite and some with shared toilets and wash areas. The rooms are basic but, you pay very little for them. This is a budget travellers dream.

For where you are located staying here, you will not be able to get better value for money. We are about 3 minutes walk away for the High Street entrance to the Arndale Centre. A walk there will take you passed Debenhams and a walk around the corner will take you to the aptly named Market Street to complete the shopping mecca you are in the centre of.

Our superb location makes us the perfect choice for all budget travellers.

A warm and pleasant hotel where a comfortable stay is always guaranteed.All our 35 guest rooms located over 3 floors are immaculately refurbished maintaining a high standard.Elegantly decorated rooms benefit from en suite bathrooms, colour TV, and tea/coffee making facilities. A sumptuous breakfast is also included in the room rates.

For holiday makers there are numerous places to see and many exciting things to do. Magnificent nightlife with more then 450 dazzling bars and authentic restaurants located right in the city centre are only moments away from us.Famous theatres, fabulous museums and world class shopping centre are simply at our door step.

Perfectly located just off Piccadilly gardens we are within close walking distance of both the main rail
station and City Metro making it convenient for guests to explore the city at its best.We also have a secure parking facility only150 meters away from the hotel.

Checking In available from 14:00 hours. Payment is accepted by:

Rating of 1.57 out of 5  Unique ID (2090544)
Guests Name: Anonymous  Guest was travelling as: Young couple
Bad stuff: The plumbing broke in the night, and breakfast was cancelled.
Overall: I was very much looking forward to staying in Manchester, and was pleased to have found a cheap hotel to stay in. On arrival, the hotel was a little difficult to find, but I was pleased to have to 'buzz' myself into the main area - thus helping me feel that the room would be secure, and that no 'riff-raff' would be able to randomly walk into the reception area. The receptionist was pleasant enough, but didn't seem to know about the part where you 'book online, pay on departure' and as a result, I was forced to pay the balance on check-in. After receiving the key to the room, I was very disappointed to find that the door to our room seemed very unstable indeed, and was convinced that a swift kick to the door would have had it open without the aid of a key. The room itself was comfortable enough, and the bed was made. On further inspection of the bed, I found someone elses old contact lense in amongst the sheets, which could only lead me to believe that the sheets had not been changed, although they looked clean enough. The shower was far too small - with barely enough room to move in it, and there was no shelf in there to place any toiletries. There WAS enough toilet paper available for the evening, and the toilet DID flush (which was nice), although the door to the bathroom would stick half-way through opening, and required a 'shove' to fully open it. After leaving the room for a night out, I did feel confident that our belongings would be safe, although my previous fears about the lock on the bedroom door remained. On waking in the morning, we woke with enough time to spare to go down for breakfast - with plans to have a shower after we had done so. Upon going to the toilet, to my dismay, the toilet no longer flushed - but I thought that I had not pushed the handle hard enough. I tried again a minute or two later, but this did nothing. On inspection of the water tank at the back of the toilet, we found that the water had been drained. We tried to top this up from water that was left over from the kettle the day before, but still nothing. Deciding to wait until we got back from breakfast to try again, we went downstairs only to be told that there had been a flood in the night, and that the water was off in all the rooms. As a result, the kitchen was not open, and breakfast would not be served. The receptionist did not seem to think that this was cause enough for any sort of refund, so we returned to our room to collect our things and leave. Needless to say - not in a happy state. On return of the keys, we were told that 'about a fiver' would be returned onto my credit card, but a week later, I am still yet to see this 'generous' offer return into my account. The flood, I am sure could not be helped, but the overall stay was sadly not a good one. I WILL be using the Internet to book a hotel again in the future I'm sure, but will NOT be booking this hotel ever again - and of that I am certain. I was very happy with the service from Active Hotels, it's just a shame about the hotel in question.
Top

Rating of 2.0 out of 5  Unique ID (2315492)
Guests Name: Anonymous  Guest was travelling as: Group of adult friends
Good stuff: The hotel's location is ideal.
Bad stuff: A closet would be nice. But I guess that the shower cabin took all the space. When you put a shower cabin more or less in the middle of the room it would be nice if it at least had frosted glass. Oh and a door which actually locks might be nice too.
Overall: The location of the hotel is ideal. If you're looking for a relatively cheap place to stay in the centre of Manchester you should book this hotel. However, when I booked the room I thought I booked a double bedroom with shower. There actually was a shower in the room as in IN the room and unfortunately the cabin wasn't frosted glass so it was a good my friend and I know each other rather well. Furthermore the bed wasn't exactly a double bed more a single and a half bed so once again it was a good thing I knew my roommate quite well. Something else that bothered me was the fact that the door to the room did not close properly, we were unable to lock it. The location of the hotel was brilliant, staff was nice and despite the fact that the room did not entirely live up to my expectations I had a great time and I have to say I slept rather well.
Top

Rating of 1.71 out of 5  Unique ID (2065311)
Guests Name: Anonymous  Guest was travelling as: Group of adult friends
Good stuff: It was closed to the station and to the market
Top